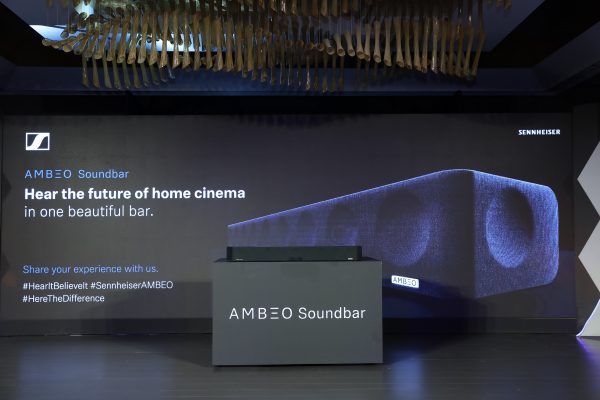 Sennheiser launched Ambeo Soundbar in India, after the launch of Momentum Wireless 3 headphones a month ago. The speaker was originally unveiled in CES 2019 and now it has been launched in India and will be available through 15 offline retailers/distributors. Various settings can be controlled via the Sennheiser Sound Control app, which is available for both Android & iOS devices.

The device is powered by 13 high-end drivers including six woofers, five tweeters and two top-firing full-range speakers that supports 3D sound and can play different audio formats like Dolby Atmos and DTS:X. The speaker doesn’t have a dedicated subwoofer, so anyone can connect a separate subwoofer. Also, it comes packed with HDMI eARC, 4K and Dolby Vision pass-through, Bluetooth, and a built-in Chromecast.

Sennheiser’s Upmix, a sound upscaling technology which converts stereo or 5.1 audio to 3D sound. The speaker is priced at Rs. 1,99,990 and according to the company, it is currently available at 15 stores in 12 cities, including Delhi, Mumbai, Kolkata, Chennai, Bangalore, Ahmedabad, Chandigarh, Cochin, Gurugram, Hyderabad, Jalandhar and Pune.